Our bodies were tender this morning, but after a final rub down and strapping of the most terrible areas, we were ready to go.

Initially, the trail lead from the city of Bad Reichenhall (472 m) uphill on the mountain Hochstaufen.

According to those whom I was hiking with it is  one of the most popular mountains for hiking in this region. We did see loads of hikers on the trail.

However, we did not run to the top of the mountain instead turned westwards half way up – a brilliant single trail which almost runs on the contour line and leads to the hill farm Zwieselalm (1386 m).

What followed next was very a steep ascent to the top of the mountain Zwiesel (1780 m).

We found ourselves on a  grassy plateau full of mountain pines and with a stunning 360° panorama view, looking to the mountain Hochstaufenand in the east and the city of Bad Reichenhall in the south and we could see lake Chiemsee and the adjacent mountains of the region Chiemgau. It was a spectacular view. Unfortunately I was on a time schedule and taking a photo would take to much time and to be honest it cannot capture what I saw at the top.

A really tough trail covered in tree roots lead over a fantastic mountain ridge to the mountain Gruberhörndl and it was followed by a slight descent in the beginning, before it got steeper and steeper and finally followed countless arduous serpentines down into the valley. I found myself in a group of Dutch runners at this point and whilst speaking with Monica, I became pretty nervous as they didn’t make the cut off the day before. But we hiked and ran well down the hills and made the cut off at check point 2 with 20 minutes to spare.

Through the mountain pines we crossed over to the mountain Gamsknogel (1751 m)  and from there, steep serpentines lead down to the hill farm Kohleralm(1450 m). It was pretty steep at this point and I only fell once.

Our last meters in altitude were spent climbing the Himmelsleiter (stairway to heaven), a steep, narrow wooden stairway leading along the centuries-old saline path.

We crossed the fire road, and after a few minutes we reached the spectacular waterfalls called Weissbachfälle (670 m).

Shortly thereafter we found ourselves on a great trail which had a slight incline to the hill farm Kaitlalm (970 m). This was then followed by another ascent of 600 m in altitude followed on a trail through the forest, which was so, so muddy and sticky. Lucky for me I have done some mud running in January during the Pilgrims challenge. We then crossed over to the mountain Rauschberg on a wide path, I could run a lot on this section and did just that.

As soon as we crossed over the peak, we were welcomed by a dashing downhill on a partially narrow trail which lead us to lake Taubensee and this was  where the finishing straight, leading into the town of Ruhpolding, began.

When I reached the 30km mark I sent Carel a txt/sms to let him know I have made it to check point 3 with an hour to spare. I also sent him another one at 2 km to go. It was so nice to see Carel and David at the approach to the finish line. By then they have had an ice bath in the river outside our hotel. 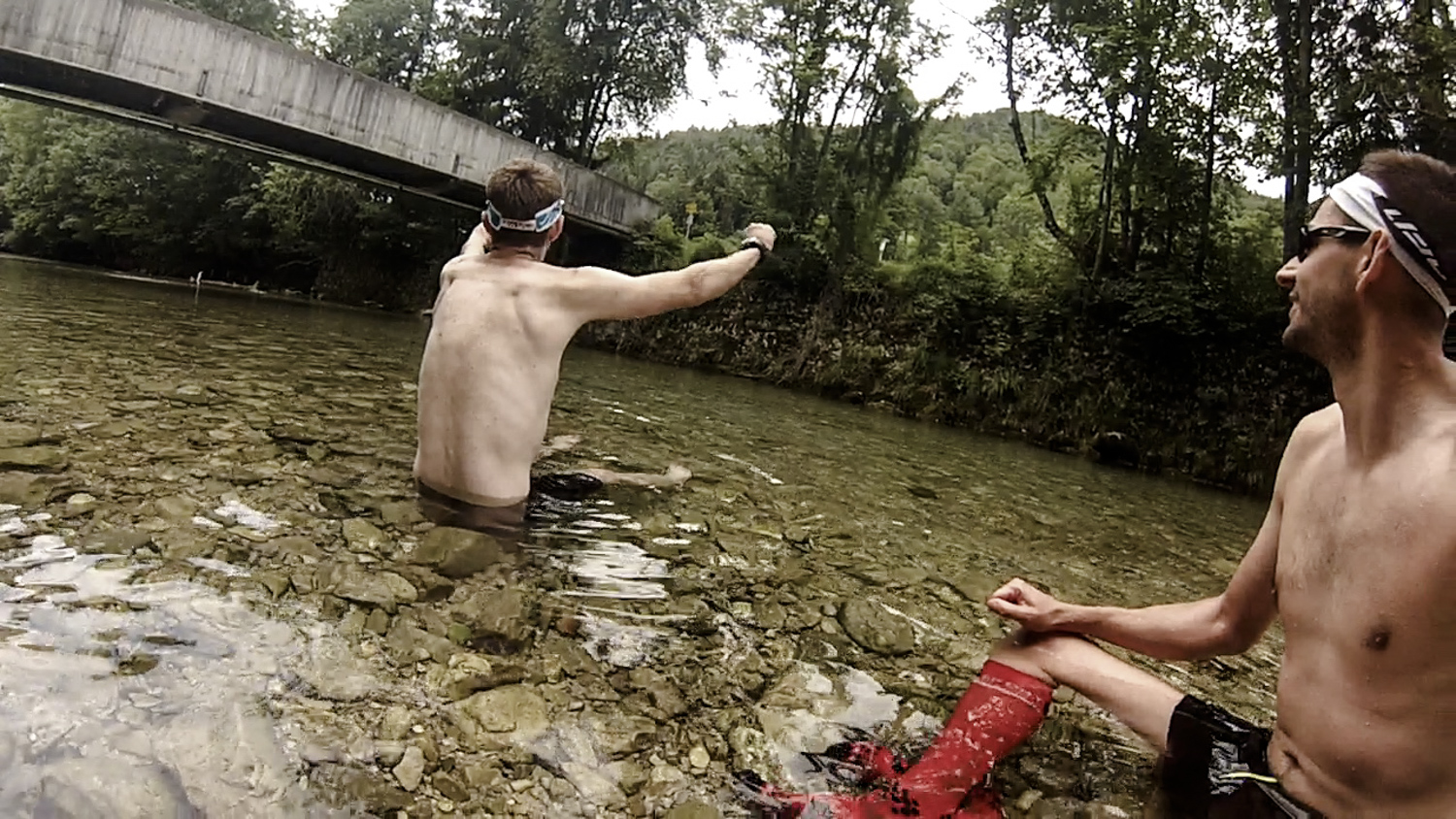